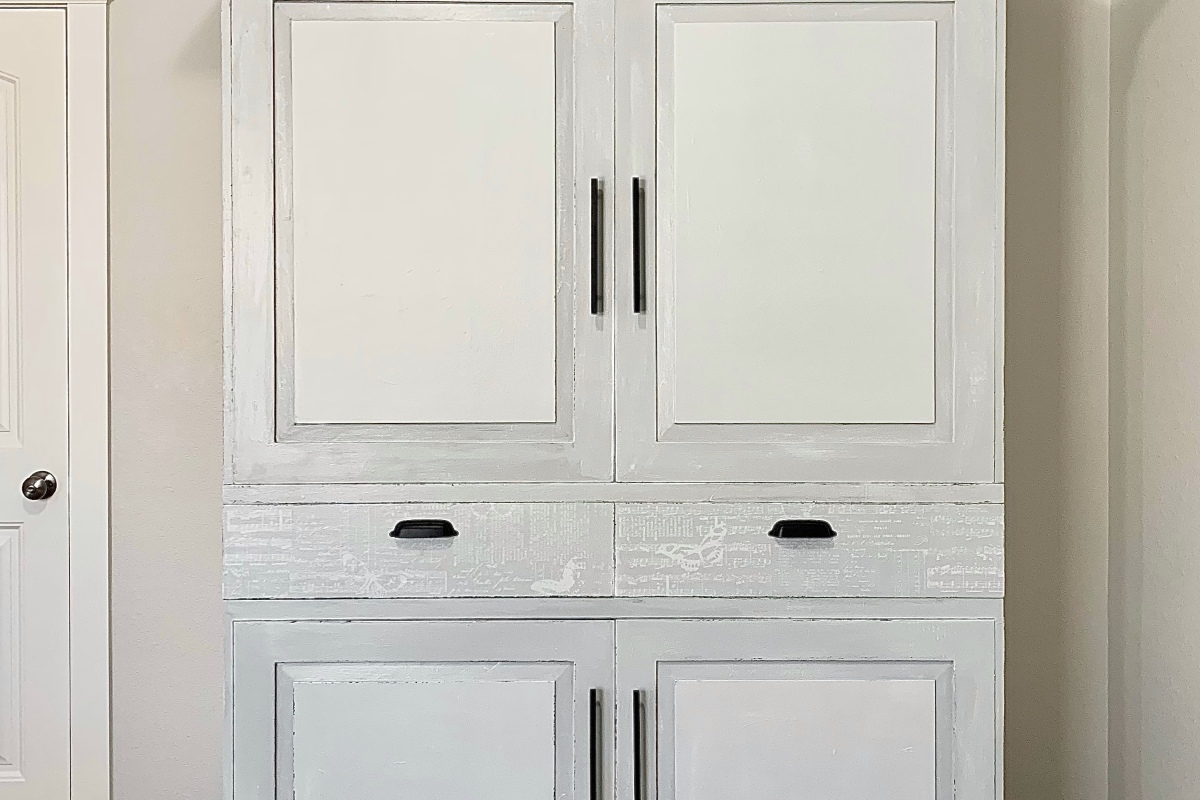 This armoire is a beast. Not only is it huge and heavy, it had some serious problems when I first got it. I was going to do a whole Beauty & the Beast analogy, but this transformation became so much more than that.

This armoire taught me lessons about how faith can move mountains.

I spent months searching for some storage options for the craft room, and decided this Pennsylvania Dutch piece from the FB marketplace had all of the storage space I needed.

But I felt buyer’s remorse the minute after I paid for it. The door hinges were stripped and falling off, and I underestimated just how huge and heavy it was. It took two trips and every ounce of muscle we had to bring it home. It barely fit in our garage, and I had to constantly nudge it a few inches so I could squeeze around to work on it. And the whole time I was worried about hanging those stupid doors.

My husband suggested not putting any work into the armoire until I could get the hinges right… but I knew once the doors were hung, they’d break or fall off when we moved the beast into the house. Based on the size of this thing, I also knew that once it was moved inside, we’d never move it out again. I was feeling so much remorse, that I almost put it on the curb, and I was stuck wondering if I should even move forward.

But then I heard President Russel M. Nelson say that one way to use faith, is to ACT in faith, so I pushed forward.

And after a lot of prayers, and tears, and research, FaceTime sessions with my dad for advice, an injured arm, painting set backs, 4 different kinds of hinge fails, a wallpaper fail, and a 2-hour move job by my amazing men, the Beast was painted and in the room!

But through it all, I learned a few new things about hinges. I learned how to repair stripped holes, and I learned about just how much my hubby and boys love me.

I learned that it’s often the journey of moving forward that makes our faith grow the most. The affirmation of our faith comes after the struggle.

And maybe there still is a Beauty and the Beast Analogy here too…. after all, Belle had to move forward not knowing the outcome, as well!

So if you’re struggling and not sure how to move forward or what choice to make, my advice is to begin.

President Nelson said, “Your growing faith in Him will move mountains — not the mountains of rock that beautify the earth — but the mountains of misery in your lives… Your flourishing faith will help you turn challenges into unparalleled growth and opportunity.”

I’m so pleased with how this beast transformed. The doors still aren’t perfect, but they’re close enough. And through it all, I truly saw faith move this mountain.

Wife. Mother of Five. Decorator. Musician. DIY. Flea Market Junkie. Member of The Church of Jesus Christ of Latter Day Saints. I look at things not as they are, but as how they could be! Follow me on Instagram!